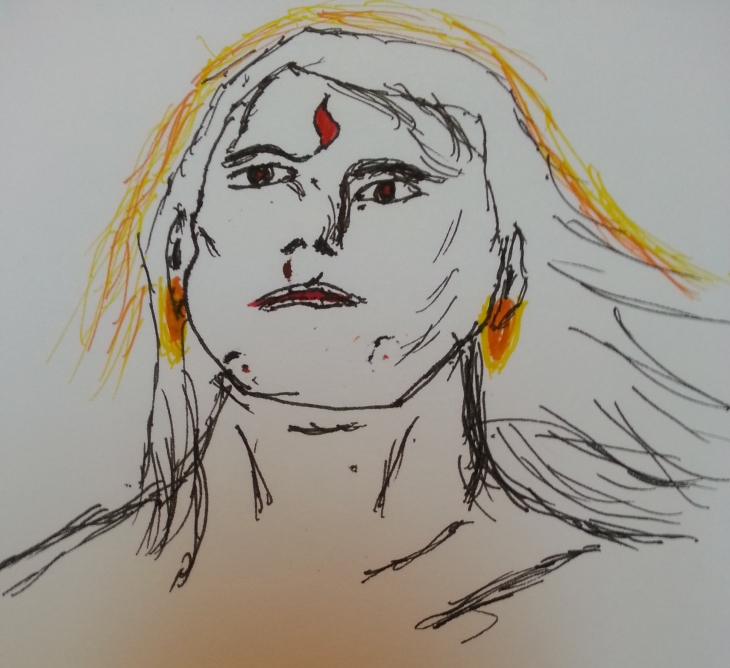 The Devi Waiting For Her Children (c) Jayant Kalawar 2019

Most areas of the globe seem to have gone through the ups and downs of 2019 quite nicely.  The planets in 2019 were aligned to provide a theater for quite some fire and light show this year, but collectively we were able to hold back from the brink. What changed the direction? I speculate on a new dynamic that has arisen that may be helping balance negative global patterns triggered by planetary forces.

In the USA, the year started with the Democrats taking control of the House of Representatives. That laid the ground for a year-long theater of conflict between the President and the Speaker of the House.  The Mueller report proved to be much milder than anticipated by the Democrats in implicating President Trump in any wrong doing. The report did point to key role of foreign powers, such as Russia, and of global digital platforms, such Facebook and Twitter, in the 2016 presidential election. This was seen by President Trump as an assault on the credibility of his victory in that election, adding fuel to the fire in the Trump-Pelosi script. The result is the impeachment process, which is continuing at the time of this writing, in early December 2019.

The trade war with China did not escalate to a physical war. And while negotiations with North Korea may be seen to have had a setback, they may have bought time in the potential escalation to war in the Korean peninsula. With Iran, the escalation of economic sanctions almost seemed to be on the brink of an all-out war mid-September 2019. But President Trump seems to have called it off at the last minute – and we may be all the better for it.

Venezuela went through some of the roughest times this year. Again the US held back from direct intervention and let Russia and China play into it as well.

I made two major macro level predictions in early 2019 based on a very rare long lasting conjunction of transit Saturn with transit Ketu in Sagittarius between April and October 2019.

One was that the US stock market may make a sharp downturn over 6 months between May and October 2019, before beginning to rise again. Well, it did not make a sharp down turn, instead it stagnated around DJI 26000. And then resumed its upward move in November 2019. The reason it held steady was intervention by the Fed, which began decreasing interest rates and increasing money supply beginning June, in anticipation of a downturn in the economy.  The Fed had been increasing rates in the previous year and the expectation, based on past cycles, was that it would continue to do so in 2019 or at least hold it steady. It may have been due to President Trump’s direct and public call for the Fed to begin decreasing interest rates that the Fed responded.

The other major prediction was about general elections in India, earlier this year. The prediction was that the BJP government may lose their majority unless they moved rapidly to correct the negative impact of demonetization and GST implementations. BJP did move to overcome the impact of demonetization by providing welfare benefits directly to those who needed them, through electronic transfers.  The GST implementation was also modified to decrease impact on small and medium sized businesses. The BJP returned to form a government with a bigger majority in the Lok Sabha, independent of any coalition partners.

What I notice, from the deviation of actual from the predicted, is that large public institutions in USA and India appear to be showing capacity to respond much faster to rapid feedback, when compared to the past. So what has changed? My guess is that it is the Internet: very deep and broad data with interactive capability of social media apps. With billions of people the world over interacting to continually refresh intelligence (=meaning making connected data), the Internet has become an active and very influential Global Social Mind (GSM). Each one of us who is active on the Internet influences the GSM in perhaps a very small way and is influenced by GSM greatly. The pulses, of tangled interweaving web of global connections between ever refreshing data, zaps us on the mental plane each time we interact on the Internet. World leaders, such as President Trump and PM Modi, are able to not only monitor these signals, but also respond to them and many times influence them.  Some narratives and predictions made on the Internet gain traction. That gives an opportunity to these leaders to respond and try to influence the signals, coming out of GSM, to be in their favor.

So how do I see the impact of the GSM in terms of Jyotish[1] framework of Karma and PurushArtha? Let me take up a standard example first, to set the context. A birth chart gives us insight into Karma from past lives that we are born with: it points to different sets of potential actions that are most likely to be triggered through us at different times in our life cycle. This is described by Dashas and Bhuktis and the prevailing astral energies, at any given time, due to planetary configurations (aka transits in technical Astrologese).  For example, if the astrologer notices that for an individual the transit ascendant lord is going to be stationary in 8th house while conjunct with stationary transit Rahu-Ketu, she / he may point out that the chances of an accident may increase during that time (= actions triggered by Karma). If the individual is in a city such as New Delhi, the recommendation may be to minimize being on the road as much as possible (= PurushArtha, action based on awareness of self in the environment of action, Karma Bhumi) to reduce chances of an accident.

While a busy city with challenging traffic patterns may pose risk to humans on a physical plane, GSM is likely to impact humans on the mental plane. General significations of Mercury, as well as the lords of the 2nd, 3rd, 5th and 11th houses would need to be considered, while assessing the impact of GSM. In President Trump’s chart for example, 2nd L Mercury is strong, as is his 5th house Lord Jupiter. His native Sun and Moon are strongly influenced by exalted Rahu and Ketu respectively (he was born during a Lunar eclipse). This gives him sharp mental capability and hence an ability to navigate GSM (as well on TV, with shows such as the Apprentice) to his advantage. I do not have PM Modi’s chart (it is not publicly known). However his ability to perform well both on social media and on radio (Man Ki Baat), makes me believe that his chart may have a strong Mercury (which is not a du-sthAnA lord) and have at least one of 3rd, 5th, 11th H Ls strong.

Making predictions and then reviewing them enables a learning loop. Reviewing my 2019 predictions point me to some interesting learnings, which I will continue to test through future predictions.

Global Social Mind is real and an integral part of our lives now. We are greatly influenced by it each time we touch it and in return we influence it a just a very tiny little bit. So if a prediction of dire straits is channeled to you through the GSM, you begin positioning and taking actions to remedy that potential situation. The GSM accelerates and amplifies PurushArtha potential so as to minimize Karma impact. Such PurushArtha acceleration and amplification potential may be strongly positive during those times when transit Mercury is strong and un-afflicted. The GSM may trigger strongly negative results when transit Mercury is very weak and directly afflicted (for example the Christchurch mosque massacre took place in New Zealand, on March 15th 2019, when tr Mercury was very weak at 29 deg in Aquarius, while being combust by tr Sun at 1 deg Pisces and directly afflicted by 5th aspect of tr Rahu at 0:44 deg Cancer).

In general, individuals with strong un-afflicted Mercury as a benefic and at least one of the 2nd, 3rd, 5th and 11th house lords as un-afflicted and strong, in their chart, may be best positioned to be influencers on GSM. Those with weak and afflicted Mercury in their chart, with weak and / or afflicted 2nd, 3rd, 5th and 11th Lords may be prone to be triggered to act negatively due to their interaction with GSM.

To sum up, the rise of the GSM in the last two decades now has a presence in our world in which it plays a significant role in all our lives. On the positive side, it may be helping us to stabilize global society on the physical plane through rapid feedback loops which enable better strategic positioning and thus curb the need for large scale, mass physical aggression. On the mental plane, some may say the ability of individual human mind to think and act autonomously may be more circumscribed as the presence of GSM keeps growing and we become very tiny players in that amorphous every refreshing, ever present, intelligence. Jyotish may be in the unique position to provide tools to be able to step back and become aware of the larger dynamics that are playing in our lives in the age of the Global Social Mind. Perhaps more individuals may wish to take advantage of this powerful traditional framework as one of the tools to view and chart out their course in the world in the 2020s. Especially when the practicing Jyotishis are aware of the powerful tangled intelligent web that now girds the globe and are at least attempt to contextualize their readings and guidance.

[1] In my life coaching practice, I use Jyotish as only one of many modalities to assess the strengths and weaknesses of a client as they go about attempting to achieve life goals that they have set for themselves. Specifically, I follow Systems Approach to Vedic Astrology as propounded by Professor V.K. Choudhry.